It’s been an exciting last couple of months for gold and silver investors as precious metal prices have surged off the lows of the year back in early May. Against a backdrop of the first Fed rate cut since the financial crisis, along with volatile macro conditions, gold at $1,500/oz is trading at the highest level since 2013. Silver has also perked up and nearly tested the all-important $20/oz level earlier this month. Regardless of what time frame you favor, gold and silver are in a bull market, which has brought back a sense of optimism for the miners. This article looks at the best performing gold and silver mining stocks year to date, along with the current themes in the sector. 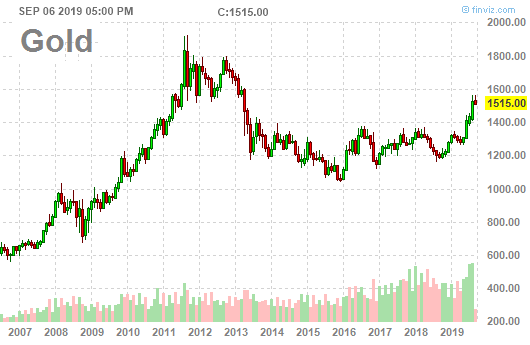 Backdrop for Gold and Silver

September, thus far, has represented a bit of a pull-back for gold and silver amid the news that the U.S. and China are set to resume trade talks, which resulted in a risk-on type sentiment for the broader market. On the other hand, the attack on Saudi oil production re-sparked Middle-East geopolitical risks, highlighting the fast-changing market dynamics. Overall, we see the trend as positive for precious metals with any weakness here as an opportunity to buy the dip.

It’s incredible to think that the S&P 500 (SPY) is within 1% of its all-time high, even as there is still uncertainty regarding the strength and momentum of the economy. While the labor market remains firm, which has supported consumer sentiment, other indicators, including industrial production and PMI data, suggest a looming deceleration. Globally, economic growth from Europe to Asia is also tepid, with China reporting weaker-than-expected growth. There is an expectation of a new cycle of monetary easing by Central Banks worldwide to support growth, and the base case is for continued rate cuts by the Fed, which has been one of the key drivers for precious metals. Overall, there are many moving parts and a number of drivers, which make gold and silver attractive as a store of value and investment alternative in the current environment.

It’s clear that the miners, which typically utilize financial leverage, have outperformed the commodity prices to the upside this year. The VanEck Vectors Gold Miners ETF (GDX) is up 33% in 2019 and 57% over the past year. The Global X Silver Miners ETF (SIL) is 19% year to date and 27% over the past 1-year period. The major mining ETFs have outperformed the commodity trusts, including SPDR Gold Shares ETF (GLD) and iShares Silver Trust ETF (SLV), each up about 2% and 27%, respectively. For context, the below chart includes SPY, which is up a modest 5% over the past year, underperforming gold and silver.

The table below presents the top 50 performing gold and silver stocks traded on a U.S. exchange and with a market capitalization of at least $50 million (and active trading volume). There are smaller miners that may present fine investment opportunities, but $50 million is simply the line we are drawing to focus the results. It’s also worth noting that the list is inclusive of companies classified in the gold and or silver industry. Among broader “materials sector” stocks, there are miners that also produce significant volumes of precious metals but are primarily focused on other metals or minerals and are thus not classified as a “gold” or silver industry stock. 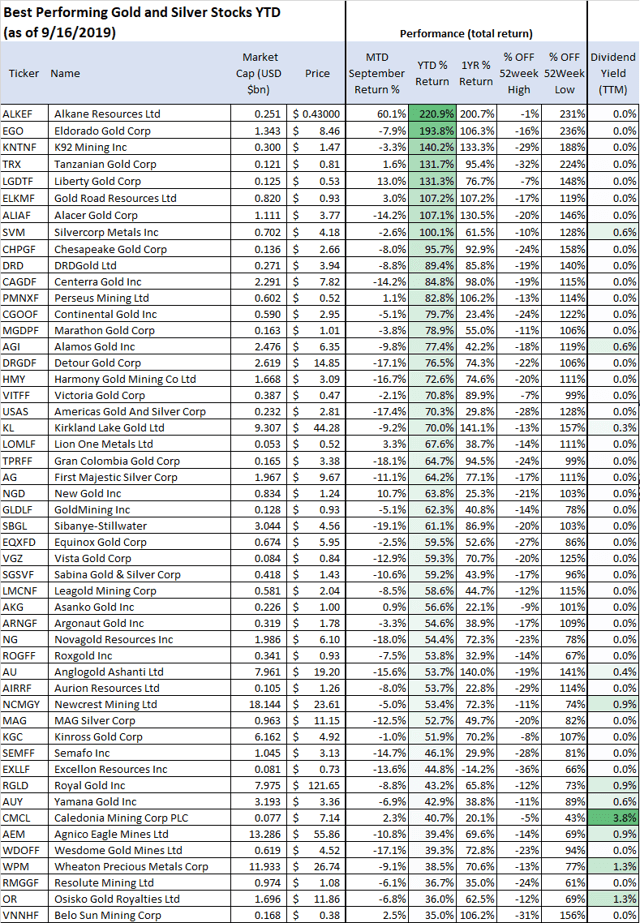 Australia-based Alkane Resources Ltd (OTCQX:ALKEF), with a market cap of approximately $250 million, is the best performing miner this year, up 220% in 2019. The stock has surged this month up 60% just in September, following the company announcement of a major discovery in three exploratory site, issuing a press release stating,

“These drill results suggest a significant and exciting discovery in a region that has a history of delivering large, low-grade and long-life gold-copper mines.”

Indeed, for a micro-cap stock like Alkane, any new discovery has the potential to change its fortunes, and in this case, investors have already been rewarded.

Eldorado Gold Corp. (EGO) with a market cap of $1.5 billion has also presented an impressive return, up 194% year to date. The company has benefited from a combination of not only steady production but also lower all-in-sustaining-costs, which reached $917 per ounce in Q2 compared to $934 last year, a relatively low level within the industry. Indeed, the combination of higher pricing and lower costs, along with news of new better-than-expected geological surveys in its major Canadian mining assets, has proven to be positive for the company.

From the group, AngloGold Ashanti Ltd (AU) is one of the best performers over the past 1-year period up 140%. Some of that increase has been based on a divestment plan to sell its South African assets, with news suggesting there are interested parties well received by the market.

Streaming company Wheaton Precious Metals Corp. (WPM) is up 39% in 2019 and over 77% from its 52-week high. We highlight this stock as one of the few with a meaningful dividend. WPM currently pays $0.09 per share on a quarterly basis, which yields 1.3% for the trailing twelve months.

The two largest miners in the industry, Newmont Goldcorp Corp. (NYSE:NEM) and Barrick Gold Corp (NYSE:GOLD), coincidentally, each with a market cap of approximately $31 billion, do not make the list as the best performers but, for reference, are up 15% and 31%, respectively.

While only the top 50 performing miners are presented above, the universe of gold and silver mining companies, with a market cap above $50 million (and actively traded shares on a U.S. exchange), consists of 95 stocks. Among the worst performers, we find OceanaGold Corp. (OTCPK:OTCPK:OCANF), Guyana Goldfields Inc. (OTCPK:GUYFF), and Midas Gold Corp. (OTCQX:MDRPF) each down 33%, 31%, and 29% each, respectively. The point here is to highlight the importance of diversification, and even within the strong bull market for gold and silver prices, not all miners have been winners.

Forward-Looking Commentary for Gold and Silver

We think that, irrespective of the next move in the stock market, and whether or not the Fed will ultimately be successful in extending the economic cycle, the conditions remain bullish for gold and silver, and we expect more upside. Here are two scenarios that could play out over the next year:

Overall, there are many options for investors to play themes in gold and silver, including the commodity price-tracking ETFs, but we favor the miners. Investors should look for mining companies that have relatively clean balance sheets with manageable debt levels and an outlook for increasing production.

Gold and silver, for the first time in many years, appear to be on a sustained upward trend with multiple fundamental and technical drivers. Precious metal miners are benefiting from a supportive pricing environment. While it’s naive to imagine prices will continue higher in a straight line, investors are urged to use caution in trade-sizing, and we suggest diversification within the group of individual mining stocks.

The data above highlights the wide range of returns and significant volatility in the group, which represents risk going forward. We hope this list serves as a good starting point for further research. We are bullish and expect more upside for the group. Let us know in the comments section which stock deserves a closer look.

How Canopy Growth Fell From Grace