The bear market in pot stocks has left billions in convertible debentures underwater, meaning cash-starved companies may have to “creatively restructure” their debt or pay a bill they didn’t expect would come due.

Converts are a form of interest-paying debt that can be converted into stock at a set price. Investors generally buy them on the assumption that shares will appreciate, giving them the opportunity to convert at a discount. If they choose not to convert, companies have to repay the principal when they mature.

That was appealing when stocks were appreciating, but the recent rout in what had been high-flying marijuana stocks has left the shares far below the conversion price — at just the time when cash-strapped companies are finding it tough to raise capital.

“We expect more companies with near-term maturities to attempt to creatively restructure their converts if they can,” said Neil Selfe, founder and CEO of Infor Financial Group Inc., a Canadian investment bank that’s active in the cannabis industry. “We are very busy on a number of restructuring and debt-related files given that the equity markets are closed.” 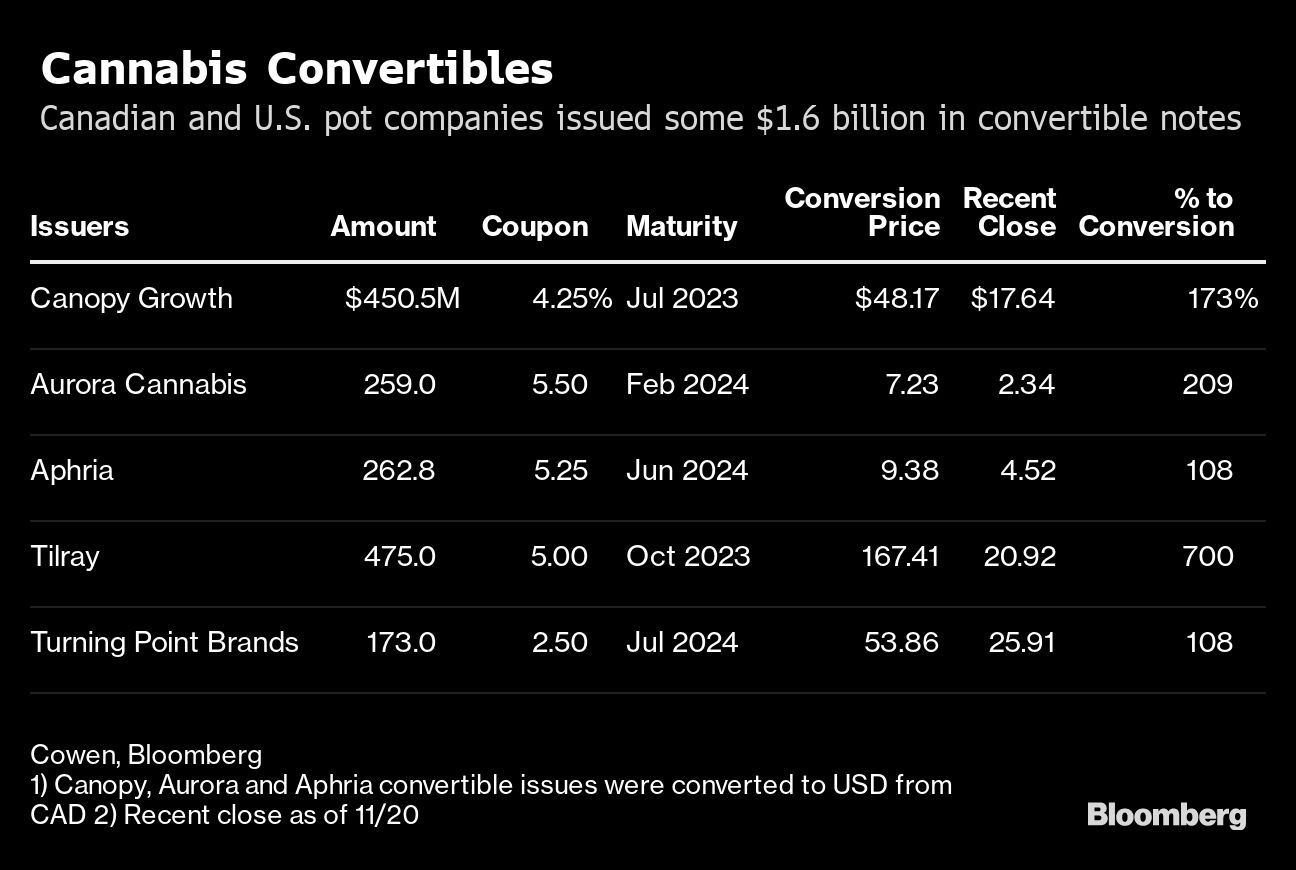 When Tilray announced its $475 million bond in October 2018, its conversion price of US$167 — when the embedded stock option would get triggered — wasn’t far off from where shares were trading, roughly in the $140-$150 band. Its stock has since fallen 87 per cent to $21, meaning investors hoping to convert are banking on a more than 700 per cent rally.

“Cross-listing equities to a U.S. exchange and tapping the U.S. institutional market provides issuers and investors with certain validation that the cannabis sector is real and investable,” Franks said.

There was a natural demand for cannabis convertibles in the U.S., especially from hedge funds that were quick to snap up the stocks, according to bankers familiar with the matter, who requested anonymity due to sensitivities surrounding the marijuana market.

But cannabis companies’ high-risk credit profiles meant terms were generally less favorable than other issuers, at a time when the pricing environment had been stronger than ever.

The summer of convertibles in 2019 meant tech companies like Snap Inc. or industrial issuers such as Fortive Corp. could get sub-one per cent coupons and 40 per cent-plus conversion premiums. Meanwhile, cannabis convertibles — many of which aren’t due to mature until 2023 — have had four per cent-plus coupons and sub-25 per cent conversion premiums.

“For investors, given how far out-of-the-money the notes are and current trading prices, the securities trade more as a fixed-income substitute with higher yield,” Franks said. “For the issuing companies, unless the valuations recover to 2018 levels, it means the securities will need to be refinanced at some future point.”

Last week, Aurora became the first big cannabis company to restructure its converts. It had US$230 million of five six per cent notes maturing in March 2020 with a conversion price of US$13.05 per share. Shares were trading at US$4.38 when it announced that holders could convert early at a six per cent discount to its recent trading price. Holders of 94 six per cent of the securities took them up on the offer.

“The market was concerned about where we would get that cash to settle that liability in March,” said Aurora Chairman Michael Singer. “That’s gone a long way to strengthen our balance sheet.”

However, Aurora’s shares tumbled 29 per cwent in the two days after it announced the early conversion, which will dilute its share count by approximately six per cent.

“Financings like this at these levels are massively dilutive to existing shareholders and it isn’t a surprise that they would react negatively,” said Infor’s Selfe.

The average retail investor was probably unhappy at the dilution but it provided an appealing option for institutional holders, who can see long-term value in a company that may otherwise have run out of cash, according to Cowen analyst Vivien Azer.

“Ultimately what will benefit these retail investors is more institutional money coming into these stocks and driving down volatility and making more capital available to drive share prices higher,” Azer said. “If this is what needs to happen to clean up these stories so we can get incremental institutional capital in these names, everyone benefits.”

How to Profit From the Electric Car Trend

Unknown Tax Dodge Are Creating Buyout Billionaires By The Dozen