Currency War Is Boon To Gold

Central banks around the globe are participating in some kind of perverse race to outdo each other in cutting interest rates. After the Federal Reserve cut its benchmark interest rate by 25bps in its July meeting, this week we saw four central banks in Asia Pacific surprising the markets with their rate decisions.

Fed Chairman Jerome Powell will no doubt be feeling the heat. With global central banks arguably taking more aggressive action than the Fed to combat falling inflation to reinvigorate their domestic economies, Powell will surely expect a consistent volley of criticism coming from POTUS Trump to do more. China taking action this week to weaken the CNH against the USD to reduce the adverse impact of export tariffs has led Trump to lash out at the Fed for being too sedentary in cutting rates.

Currency War is a Boon for Gold

The key event to watch is the next Fed meeting on September 17-18. The Fed does not meet in August, but statements and interviews from Fed committee members will be closely scrutinised to discern where they lean (hawkish / dovish). The predicament the Fed faces is that global central banks are anticipating and reacting to their dovish rate policy this year by turning dovish along with them, so to ensure their respective currencies remain competitive enough to support export growth. This has put a great amount of downward pressure on yields across the world.

Below I show two charts of the US 2 Year Treasury Yield. In the first, I wrote on 22-July-2019 that the UST 2Y Yield (1.82, then) will likely gravitate towards its natural supports around 1.20-1.30. For comparison, the second chart below shows the UST 2Y Yield today (9-August-2019), where the yield has fallen close to 20bps to 1.60. At this juncture, 1.20-1.30 on the UST 2Y looks likely to trade given the immensely dovish strategies employed by global central banks, which are in turn feeding into and affecting each of their future rate decisions. In this vicious cycle, no central bank wants to be behind the curve in cutting rates.

With the collapse in yields all around the world, there is now an estimated $15 trillion of negative-yielding debt globally. Investors are placing money in fixed income securities with the guarantee that upon maturity, they will receive less money than when they first started out. It is no wonder precious metals like gold has been rallying strongly this year, and I am highly convicted the rally has more legs to run. 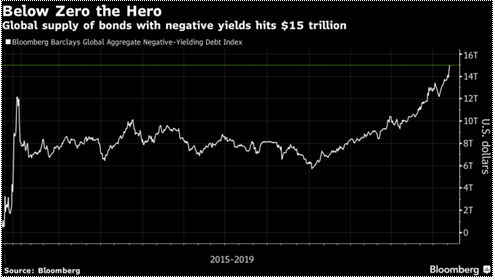 The value of gold lies in that it is a hard, physical asset that is perceived as a store of value. The markets have reacted to falling global yields by buying into precious metals, perhaps due to a mixture of lower confidence in central banks to manage the values of fiat currencies (race to the bottom), as well as the lowered opportunity cost of holding a zero-yielding asset like gold (compare this to buying a negative-yielding bond).

Central banks are mandated to make independent monetary decisions, but the Fed is not sufficiently shielded from “Teflon” Trump, who seems to be playing by his own rules at the moment. Trump has said he would nominate two members to serve on the Fed board – Judy Shelton and Christopher Waller – both who will presumably be more accommodative to Trump’s interest rate ambitions. With Trump fiercely pushing the Fed to lower interest rates, and US-China trade tensions (engineered by Trump?) in the backdrop, Powell and co. are likely to continue cutting interest rates. Even if Powell wishes to retain some semblance of independence and refutes Trump (which he has been doing, somewhat), his vice-chairman Richard Clarida has been very vocal in championing lower interest rates, along with some other voting members like James Bullard.

US locking horns with China will no doubt serve as a huge headwind for yields, as China has now resorted to using currency depreciation as a weapon to counter Trump’s punitive tariffs. While tariffs will push up the costs of Chinese goods to US buyers, the weaker CNH will help lower these costs. China let the CNH weaken past 7.00 against the USD this week for the first time since 2008, causing the US to label China a currency manipulator. While China fixed the CNH at a stronger level below 7.00 against the USD later in the week, which caused a relief risk-on rally in equities, it is now extremely clear that the country is willing to depreciate its currency if backed into a corner. A currency war will undoubtedly place more pressure on the Fed to act to lower interest rates more aggressively to weaken the USD in turn.

From a technical perspective, gold has broken out from a large base ($1,050 to $1,380) which has bound prices for the past 5-6 years. This year’s massive break out above the $1,380 resistance has led to a stellar rally, which I believe will be a very sustained one. In my marketplace service, I have successfully identified high risk-reward technical set-ups for my subscribers to hop onto the long gold trade based on charts. These have been the results thus far, where I managed to extract more than 11% in absolute gains, with each trade lasting for just 2 weeks.

In summary, geopolitical and macroeconomic developments point towards a more protectionist and “to each his own” environment, which is a huge paradigm shift away from decades of globalisation. Central banks have been placed in an unenviable position of “one-upping” each other in cutting interest rates quickly and forcefully, in a race to the bottom that will likely send yields much lower and gold much higher.

One Size Doesn’t fit all: Strict Regulations Meant for big Banks Holding back Fintech in Canada