“Follow The Trend Lines, Not The Headlines”. The quote, attributed to former President Bill Clinton, is one of my favorite pieces of advice. Clinton was referring to long-term data that show that conditions have actually been improving for the human race despite popular opinion to the contrary. When applied to investing, it cautions against missing opportunities because you’re too busy reacting to negative news.

To be sure, there’s more than enough negative news right now: international trade tensions, volatility in Syria, Brexit, an impeachment inquiry and much more.

As I’ve said before, I happen to be a news junkie. The U.S. Global Investors office has a number of TVs, all of them tuned to financial news networks. I constantly urge everyone on our team to stay informed and raise their awareness of what’s happening around the world and in their communities.

But this alone doesn’t guide our investment decisions. If we based everything on what the talking heads tell us, we may never have the confidence to invest so much as a dime.

Instead, we focus on fundamentals such as moving averages and standard deviation. We follow leading indicators such as the purchasing manager’s index (PMI) and consumer confidence index. These factors are many times more effective than the headline news at shining a light on the right path.

Mike Matousek, head trader at U.S. Global, has a colorful saying that complements this idea: “It doesn’t matter if they make jelly beans or trash can lids, if a stock’s going up, you want to own it.” And conversely: “If it’s going down, you don’t want to own it.”

Did You Catch These Opportunities?

Let me give you some real-world examples of what I’m talking about. A lot of the news coming out of China right now is negative. Its economy is slowing. Tariffs are hurting trade. The Hong Kong protests are causing geopolitical pressure. It’s enough to make an investor run and hide.

Which would be a mistake. Take a look at the chart below. The First Trust Chindia ETF, which invests in companies in both China and India, is up more than 20 percent for the 12-month period through October 25. That’s enough to beat the S&P 500 over the same period. 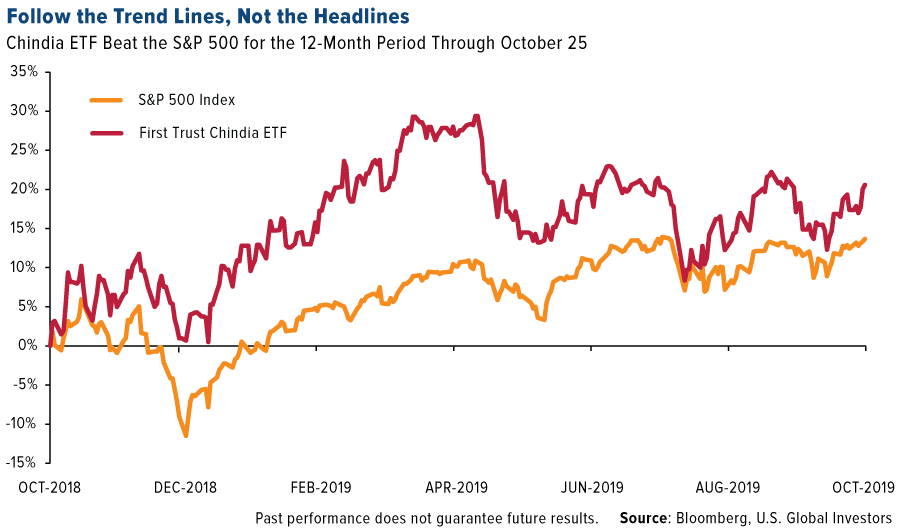 Or consider British stocks. You might think that Brexit uncertainty has made investing in the U.K. a nightmare. And yet the opposite seems to be the case—the iShares MSCI United Kingdom ETF is up close to 10 percent for the 12-month period.

Another good example are the recent copper strikes in Chile. In this case, bad news is actually good news. With production halted for days at Chuquicamata, the world’s largest open pit copper mine by volume, global supply could be disrupted, which may push up prices. Due in part to the strikes, copper is on track for its second straight month of positive gains and its best month since February. 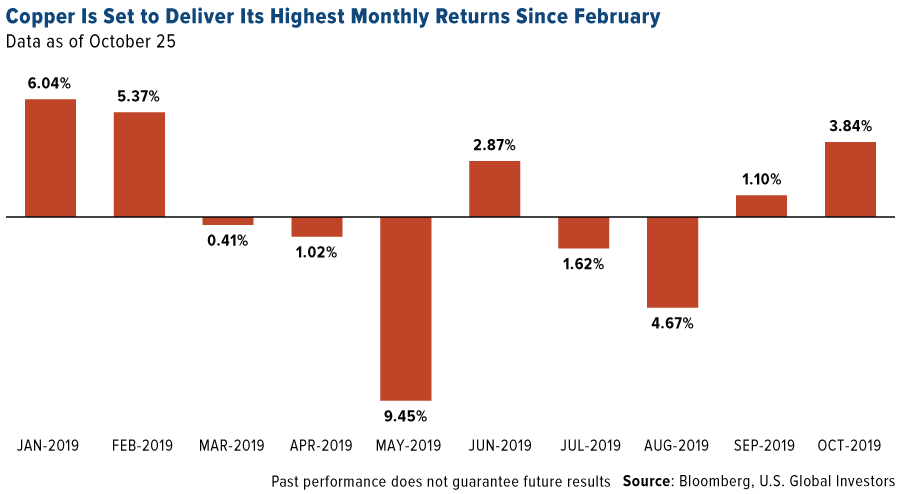 Keeping an Eye on the PMI

Again, one of our favorite leading indicators is the manufacturing purchasing manager’s index, or PMI. The gauge compiles data from thousands of factories and manufacturers across the globe, measuring data points such as output, new orders and employment. At the beginning of every month, we get a number that reflects the health of the industry.

September’s PMI was 49.7. That’s in contractionary mode, but because it’s up slightly from August’s 49.5, factories are pulling back at a slower rate.

We won’t know what the PMI is for October until later this week, but if it shows that we’re back to a neutral 50.0 (or better), it could mean good things going forward for energy and commodities.

According to our own research going back 10 years, when the global manufacturing PMI rose above its three-month moving average, commodities and commodity stocks appreciated six months later. Copper, for instance, gained an average of around 10 percent, with a 71 percent probability of occurrence. West Texas Intermediate (WTI) oil returned about 5 percent. And so on. 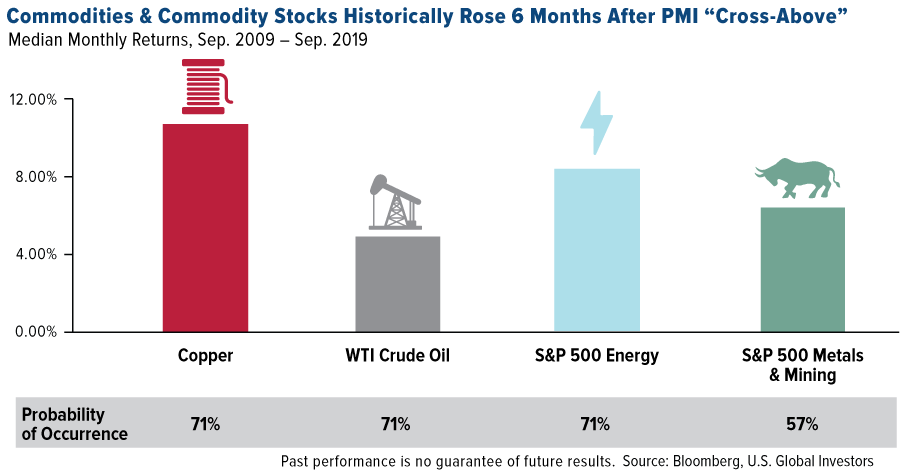 Conversely, when the PMI fell below its three-month moving average, materials historically declined—or, in the case of energy, was essentially flat—six months later. 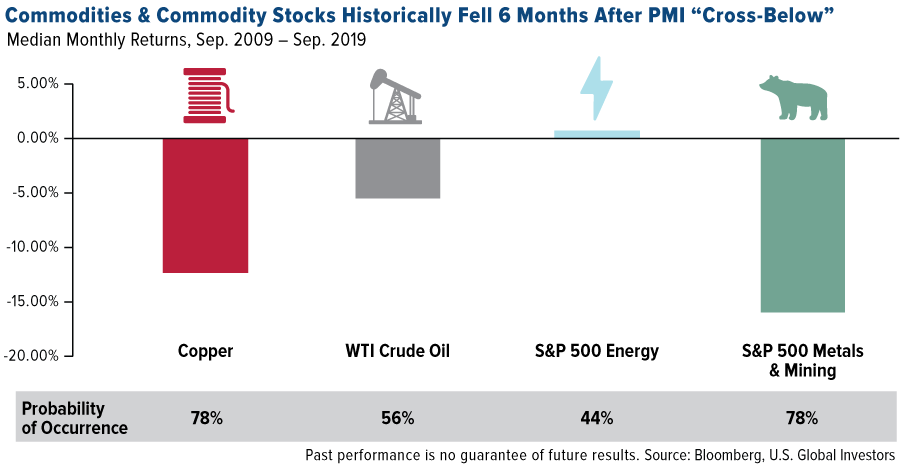 Again, these results are based on 10 years’ worth of data. We’re hoping for a stronger PMI for the month of October, which would help give commodity prices and mining stocks an extra shot of momentum going forward.

China Is an Underrated Threat to the World