Gold at a Record High Close for This Year

As of 4:40 PM EDT gold futures basis the most active December contract is currently up $7.20 and fixed at $1535 per troy ounce. This is a new record close for this calendar year. Although gold futures had traded to an intraday high of $1545 on Monday of this week, the effective close came in at $1514. 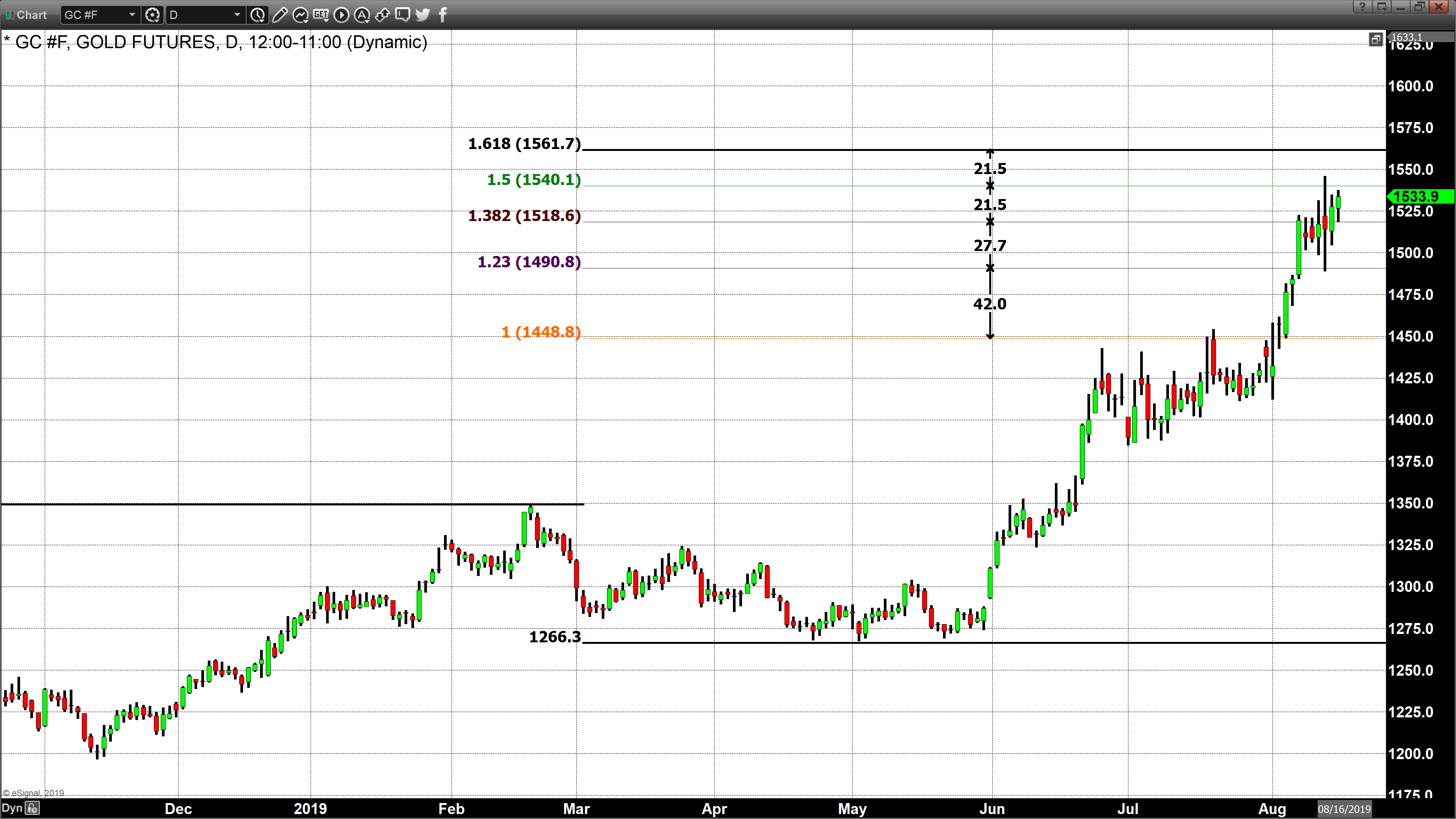 It is been a perfect storm market scenario with multiple economic and geopolitical events fueling this most recent run up.

Central banks globally including the Federal Reserve have recently pivoted from a monetary policy of quantitative normalization or tightening, to a much more accommodative policy with rate cuts and the availability of cheap money. This reversal to a much more dovish demeanor includes rate cuts as well as major asset purchases by central banks to reinvigorate the economic expansion.

The current trade war between the United States and China has been cited as one of the key factors which has forced global central banks to act in kind. With the current market sentiment which believes that the trade war will drag on throughout the remainder of the year global economic slowdowns are expected to continue even with central bank intervention.

Recently the U.S. Treasury yields of the 2-year and 10-year notes have inverted. The interest rate differential between these two notes briefly fell to a – 1 basis point. It is believed that this inversion often precedes an economic decline, fueling the belief that this inversion could lead to a potential recession.

Add to these factors the real potential that global equities could enter a corrective stage based upon a global economic slowdown and you have multiple events which collectively create a perfect storm scenario for a strong and long-lasting rally in gold.

In an interview with Neils Christensen, Editor of Kitco News, Ira Epstein, director of the Ira Epstein division of Linn & Associates, Inc. said, “Everyone is now cutting interest rates aggressively and in a race to the bottom gold wins … Investors should be looking to buy gold on dips because it appears that the precious metals bull market is not going to end anytime soon.”

In fact, many analysts are currently reevaluating their forecast for gold pricing moving into the end of this calendar year and have raised their forecast to as high as $2000 per ounce.

As reported by MarketWatch, “Gold has benefited from a spate of supportive factors over the past few months, and some bulls now see the precious metal making a climb to a record high of $2,000 an ounce.”

Brian Lundin, editor of gold newsletter said, “There has been a strong undercurrent of demand for gold. Even as short-term factors like the China trade dispute may come and go, longer-term investors are confident that the issues of monetary debasement and other geopolitical factors will continue to impact the market.”

Although analysts may disagree about where gold prices will go to this year, collectively the vast majority including myself believe it could be substantially higher.

One Size Doesn’t fit all: Strict Regulations Meant for big Banks Holding back Fintech in Canada