How to Profit From the Electric Car Trend

Major automakers have been producing hybrid and fully-electric cars for years now. But the majority of them have been smaller models. They’ve largely catered to environmentally-conscious buyers, who care less about aesthetics. Frankly, they haven’t been incredibly popular with the majority of U.S. consumers.

From The New York Times:

Over the last 10 years, major automakers have introduced some two dozen electric cars in the United States, and almost all have flopped, mainly because they were aimed at helping manufacturers meet fuel-economy and emissions regulations as easily and inexpensively as possible …

In general, they were slower, less roomy and more expensive than comparable gasoline models, and often rather boring to look at.

Meanwhile, the major automakers cranked out larger, gasoline-powered cars and SUVs that continued to be the favorite of most U.S. auto-buyers.

But Ford’s new Mustang Mach E is evidence of an industry that is evolving. We’re seeing more electric vehicles show up in models and styles that Americans prefer to drive.

In fact, Tesla is expected to make headlines later this week when it unveils an electric pickup truck. Tesla CEO Elon Musk has said the truck would be “better than the (Ford) F-150.” Turns out Ford also is working on an electric F-150, and released video showing a prototype pulling a line of freight cars.

Bottom line — electric vehicles are our future. Adoption will only speed up at this point.

One angle we’ve highlighted is batteries. In a Digest from earlier this year, we noted that global automakers are planning on spending huge volumes of money on battery technology in the coming years.

With this in mind, in today’s Digest, let’s turn to Eric Fry, InvestorPlace’s global macro specialist. Specifically, let’s look at a fascinating, “back door” way to play this EV dependence on batteries.

After all, wouldn’t you sleep better at night if you weren’t worried about whether you’d picked the right electric automaker, but instead, had invested in something that will be in demand by all automakers?

Let’s see how well you know your commodities.

The results of the 2019 LME Metals Seminar poll are in (which, undoubtedly, you’ve been anxiously awaiting for months …). Which metal took the prize as most likely to shine in 2020?

Though gold is a good guess (and came in second), the winner is nickel.

Eric tells us that while we shouldn’t put a great deal of weight on this poll, it underscores nickel’s growing importance to the electric vehicle trend.

From Eric’s most recent issue of Fry’s Investment Report:

During the first half of 2019, for example, the global EV industry absorbed about 27,350 tonnes of nickel — a whopping 79% year-over-year increase.

This surging demand results not only from growing EV production worldwide, but also from rising “nickel intensity” per EV. Because EV manufacturers are using higher-nickel cathode chemistries in their battery packs, the average amount of nickel per EV jumped 42% year-over-year, from 8.2 kilograms (kgs) per vehicle last year to 11.6 kg now. 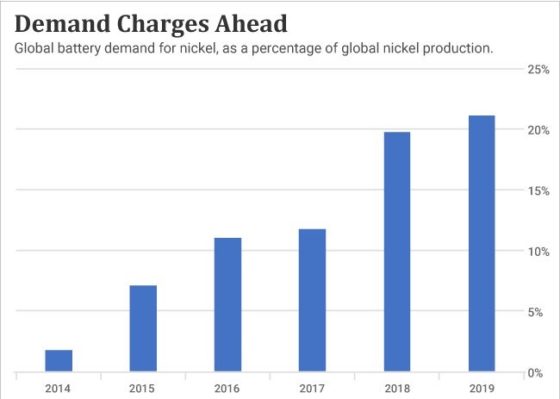 Eric goes on to tell us that nickel prices have surged in recent months, thanks to this swelling demand from the EV industry, coupled with temporary supply constraints from Indonesian nickel mines.

As global stockpiles dropped, there was a record-breaking drawdown of nickel inventory on the London Metals Exchange.

Below, you can see the inverse relationship between nickel reserves (the orange line) and the metal’s price (the blue line).

Note the steep decline in reserves over the last couple years, that has helped pushed the price per tonne from $10,000 to more than $15,000. 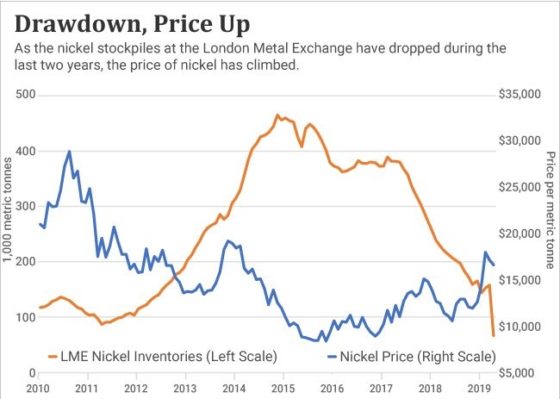 Eric tells us that the pace of withdrawals has slowed in recent days, but stockpiles remain near their lowest levels in more than a decade.

Looking back at the chart above, you can see a sharp reversal in nickel’s price very recently.

Here’s Eric on what’s behind this:

Nickel has fallen almost 15% from its September peak, as concerns about supply constraints eased.

Since September, the nickel market has come under selling pressure. And this downward pressure may persist for a while. 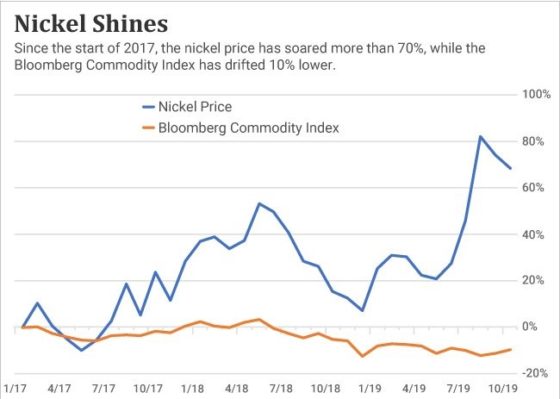 But in the nickel market, EVs and battery technology are the new kids in town. As their influence grows, it will likely put continued upward pressure on the nickel price.

Eric isn’t the only one who sees nickel’s price rising. Reuters recently reported that nickel will see greater demand in coming years as batteries contain greater volumes of nickel.

Originally, cathodes comprised one part nickel, one part cobalt, and one part manganese. But cathodes with 80% nickel are expected to dominate the industry in the coming years as technologies advance.

One consultancy predicts that as electric vehicle sales climb, nickel demand from the battery sector will rise nearly 10% in roughly the next two years.

One stock that closely tracks the price of nickel is PJSC MMC Norilsk Nickel (NILSY). Eric tells us this Russian company is the world’s largest publicly traded “pure play” on nickel.

Below is NILSY’s 12-month chart. You can see how, despite the recent pullback in November, its trend is still decidedly up. In fact, even after this pullback, it’s still up nearly 55%. 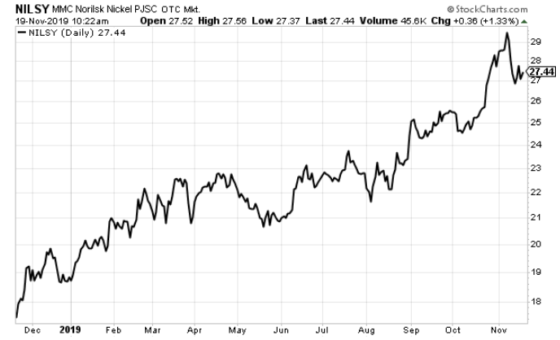 Whether a pure-play nickel investment is right for you or not, the broader point remains — expect major growth from the electric vehicle market.

Technology has enabled us to deliver finally what people really want. We have reached a point where customers don’t have to make trade-offs.

But why gamble on which major automaker will win the “electric” war? Why not invest in the specific commodity that will power the war itself, independent of who wins or loses?