Intrepid Potash (IPI) is an American company that has historically mined, processed, and sold potash and langbeinite-based fertilizers. A decline in potash and fertilizer prices to near-decade lows over the last 6-7 years dramatically reduced the company’s market cap and put them in a precarious financial position. Management was slow to adapt to the changing environment as commodity prices fell, but they have made significant changes over the last couple of years that have strengthened their financial position. These changes have included reducing production costs by moving to more extensive use of solar evaporation mining, expanding their sale of salt and other mining by-products, and most importantly by beginning to sell water to oil and gas companies operating in the nearby Permian Basin. Water sales in 2018 alone are projected to bring in an additional $28-35 million in revenue, which is impressive given the company’s market cap currently is about $370 million. Despite these improvements to the business and a notable rise in potash and fertilizer prices over the last six to nine months, Intrepid Potash is trading at a discount to projected 2019 book value. As the stability of the business becomes more apparent, I believe the stock will close that gap and reward shareholders in the coming year.

What is a reasonable P/B ratio for IPI?

I think it is worth briefly discussing different ratios that one could use to value IPI. Given that commodity prices can be volatile year to year, I am less inclined to rely on a P/E or P/S ratio, as the top-line revenue numbers will vary quite a bit and their average values are less likely to tell a useful story in the short-term. I am more inclined to use the P/B ratio, which I feel gives a better sense of the value inherent in the company and is still useful in years when there are no profits generated.

While it is true that past performance is no guarantee of future results, looking at historical P/B values we can see the five year average ratio is around 1. The ratio has reasonably been higher when the business was in better shape and dipped quite low in 2015 and 2016 when the company was facing a potential bankruptcy and potash prices were at decade lows. With the underlying fundamentals of the business improving, and the current P/B ratio hovering just below 1 anyway, I believe it is reasonable to project IPI will trade at a P/B of 1 in 2019

While I would be hesitant to project IPI’s financials too far out in the future, we already have some information about how 2019 will look and I think it is possible to consider a range of reasonable outcomes and make some conservative assumptions. IPI has five main sources of income: potash sales, langbeinite-fertilizer (brand name TRIO) sales, by-product sales, water sales, and a new oil field services division. First let’s look at potential gains from the potash and by-product segments. These two segments fit together, as by-product sales are subtracted from the COGS equation for potash production. Looking at Q3 of 2018, the latest quarter we have data for, we can see that IPI sold 74 thousand tons of potash at a gross margin of $7 million (including the sale of by-products). This comes out to roughly $95/ton in gross profit. As stated on the last conference call, there will be a $25/ton price increase on potash sales beginning in Q1 2019, which will come at no additional cost to IPI and push their profit per ton to roughly $120.

To estimate the number of tons that will be sold, we can look at recent years and historical averages. 2018 total tons sold looks to be in the ballpark of 340k, the 2017 number was 352k tons, and the five-year average is around 400k tons. Multiplying by my $120 profit/ton, I get a gross income range of $40-$48 million. Subtracting out an estimated $21 million in 2019 SG&A expenses, we can estimate that the potash segment will produce $19-$27 million in additional book value.

Water sales are a little bit trickier, given how IPI accounts for them on the books. When IPI receives cash for water payments, the company offsets this cash on the balance sheet with a deferred revenue liability until the water is delivered to the customer. It is a bit of a stretch then to treat estimated 2019 water sales as a pure add to the book value, but I am comfortable making the assumption as in practice the sales will be applied to the bottom line at some point in the near future after they are booked. To estimate water sales, we can start with a baseline of $15 million that is part of a 5-year water purchase commitment made by an existing customer. If we use the estimated range from 2018, without predicting any growth, we would be in the areaof $28-$30 million in sales. It is a little unclear to me how to apply COGS to the water sales. Statements by management in the past have indicated gross margins around 80-90%, so to be conservative I will apply an 80% margin rate. This would put water’s addition to book value in the range of $12-$24 million.

Finally, I am going to make a pair of conservative assumptions and not include any positive contribution from the TRIO and oilfield service segments. TRIO pricing has been particularly soft over the last few years, resulting in modest but negative gross margins. In Q3 2018, the segment broke even and management has indicated that they are seeing improved pricing in that product area, but I am not going to assume it will make a tangible impact in 2019. Oil field services is a relatively new segment, so I am less comfortable predicting what degree of impact it will have. So far, per the CEO, the services area has been “generating revenue at a rate of $150,000 a month which is more than the total initial capital cost to install the entire [business].” This is a fairly insignificant amount, but I could see it growing as the year progresses. None the less, to err on the conservative side, I am choosing not to include it.

Putting it all together, I get a range of anywhere from an additional $31 to $45 million being added to IPI’s book value in 2019. Adding to the latest 10-Q book value of $409 million, that gives me a rough range of $440 to $454 million of expected book value for the end of 2019. At the time of this writing, IPI’s market cap is $370 million, so even without taking any Q4 2018 additions into account, and assuming as I stated earlier that IPI is trading at book value by the end of the year, I could see IPI reasonably returning 19-22% in 2019.

As should be evident, my investment thesis relies on many assumptions. I believe they are conservative and realistic, but they could certainly be wrong. Potash pricing can be quite volatile and even if prices do hold steady, there is no guarantee that the price increase at the start of the year won’t substantially reduce volume of product sold. The TRIO segment could under-perform enough to hurt the overall bottom line of the company and there have been some rumblings that IPI’s right to sell its water to oil and gas companies could face legal challenges. All that being said, I also believe there is a good chance of positive surprises in 2019. Potash prices have been rising steadily for the last year and could very well continue to do so (see chart below). The TRIO segment could also easily experience pricing gains, and as the new VP of the oilfield services division gets more established at the company I could see positive catalysts coming from that area as well. If nothing else, I feel this evaluation can act as a starting point for further research and discussion. I would be very curious to hear others’ thoughts in the comments. 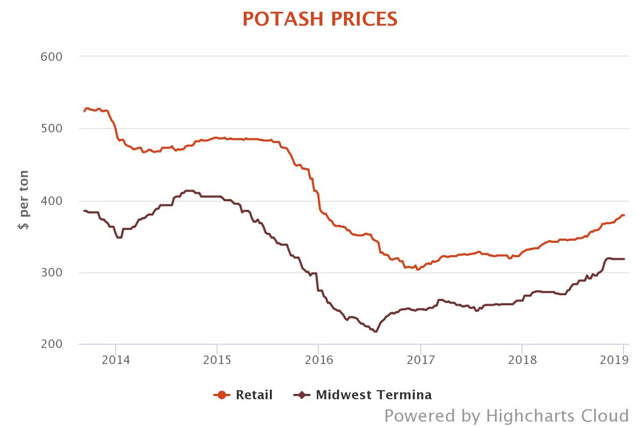 Intrepid Potash is in a dramatically different position today than it was at the beginning on 2018. Fertilizer prices have risen, margins have improved, the company is expanding into new industries, and there is 36 times as much cash in the bank. All signs point to the company adding a substantial amount to its book value in 2019 as a result of these improvements. As Intrepid Potash continues to prove to the market that it has returned to a stable financial footing, I believe the market will reward it with a more historical price to book valuation of 1 and add ~20% to the value of the company’s shares.

Who’s Really Behind the World’s Most Popular Free VPNs?