Is Tesla Worth It?

That’s the provocative question that Eric Fry, editor of Fry’s Investment Report, posed to subscribers a few weeks ago.

Love it or hate it, few stocks rile up the emotions like Tesla.

One on hand, you could view the company as a debt-ridden, money-destroying behemoth with an irrational valuation and an ego-fueled maverick at the helm.

On the other hand, you could say it’s a revolutionary technology pioneer, harnessing renewable energy with beautiful automotive design, led by a visionary genius.

If you visit Tesla’s “Conversations” tab on Yahoo! Finance, you’ll often find a heated battle between bulls and bears. Many times, what begins as a disagreement on an investment point devolves into a vicious volley of personal attacks.

Returning to Eric’s question, what’s behind it is a larger issue …

You see, electric vehicle technology is gaining global popularity and market share faster than many investors expected. At the same time, these vehicles require advancements in energy storage technologies. These technologies are the seeds of what Eric calls “The Second Electric Revolution.” Eric has written that he expects this revolution to introduce sweeping technological advancements that will impact our daily lives in ways we simply can’t yet comprehend.

As investors, this points toward a question we must answer — what’s the wisest way to play this revolution? How can we maximize the odds of spectacular returns while protecting ourselves against the inevitable failures that are a part of any emerging industry?

It’s impossible to answer that without considering the 800-pound gorilla in the room — Tesla.

So, what’s a Tesla worth? Is it the best way to play the Second Electric Revolution? Or is it merely the groundbreaking company that has helped usher in new green technologies, yet will be left behind once competition catches up?

First, let’s point out that Tesla shocked investors two weeks ago by reporting an unexpected profit. Analysts had been looking for a loss of $0.24 per share, but the number came in at profit of $1.91 per share.

Tesla soared 30% in the wake of the announcement, and has held a good chunk of those gains in the subsequent weeks.

Now, Eric’s analysis came before this earnings surprise, so it’s based on Tesla’s then-share-price of about $260. So, keep in mind the 23% price tag increase as we proceed …

Eric begins his analysis by looking at overall valuations relative to some competitors:

At the current quote of $260, the stock market says Tesla Inc. (TSLA) is worth about $46.5 billion. This sizable sum is greater than the market values of either Ford Motor Co. (F) or BMW AG (BMWYY), and it’s just slightly less than the combined market values of Nissan Motor Co. Ltd. (NSANY) and Porsche SE (POAHY).

These comparisons are somewhat surprising, given Tesla’s prodigious loss-making “power.” The company has racked up more than $3 billion in losses over the last two years. By contrast, Ford, BMW, Nissan, and Porsche have all racked up billions in profit during that time frame. 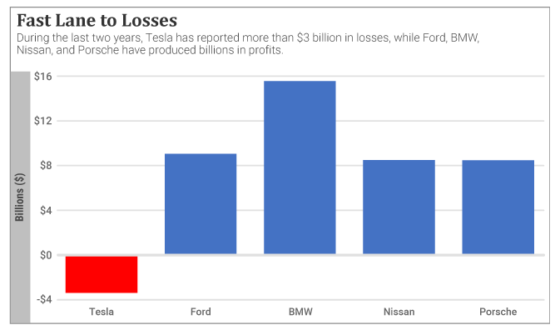 So, despite Tesla’s swing to profits two weeks ago, we have a company that has burned through $3 billion in recent years … yet one that is more richly-valued than four established, consistently-profitable auto manufacturers.

We’d also be remiss not to mention that the earnings surprise has several question marks. For example, automotive revenue was down 12% (shockingly, revenues here in the U.S. collapsed 39%), total revenue was down 8%, free cash flow was down 58%, and total debt was up 12%. So, camouflaged by the swing to profits are some alarming other metrics.

Tesla is a groundbreaking first-mover in its industry. Does that warrant additional leeway with its financials? If so, does that make it the right play for the Second Electric Revolution?

Tesla does not exist in a vacuum. Like virtually all other companies, Tesla requires parts and components sourced from 3rd-party suppliers.

Here’s Eric on this:

With this in mind, might these mining and renewable “picks and shovels” companies be better for our investment dollars?

In Eric’s issue, he walks through the valuation of seven specific mining/renewable companies. As one example, there’s Antofagasta (ANFGF). It’s a Chilean copper producer with a market cap of nearly $11 billion.

Eric points out that many of the stocks in these two sectors are trading well below their all-time highs. Some of them are downright depressed.

Thanks in large part to this, a well-capitalized investor could buy all seven of these smaller companies for the same amount of money that Tesla is worth — and again, this was before Tesla’s recent 23% price surge.

But if we’re questioning Tesla’s worth as an investment, let’s be fair and question these other plays too. After all, the low valuation of these seven companies doesn’t necessarily mean they’re a “buy.”

Obviously, “cheap” is not synonymous with “buy.” Just because you could sell Tesla and buy all seven of these companies doesn’t mean you should. Many of the stocks in the resources sector, for example, are depressed for a reason.

Demand has failed to match supply in most commodity markets. That’s why the resources sector has been suffering a fierce bear market for most of the last 10 years …

Nevertheless, as poor as the recent earnings results in the resources sector have been, the operating earnings of the (these seven plays) are still much, much larger than those of Tesla. Infinitely larger, actually.

Over the last 12 months, Tesla produced over half a billion dollars’ worth of net income … a negative half billion, that is!

Over the same time frame, (the seven plays) produced combined net income of $1 billion. That may not sound like a huge success, but at least it’s a number with a plus sign in front of it.

That’s how many Tesla bulls may respond.

Okay, but let’s be realistic — the days of Tesla being the only game in town are nearing an end. From GM to Porsche, competitors are now entering the electric vehicle space, offering real alternatives.

On this note, as I write, news is out that Fiat Chrysler and Peugeot owner PSA Group are merging — to the tune of $50 billion.

Yes, Tesla made electric vehicles “cool” and it’s the undeniable market leader. But as competition heats up, it’s ushering in a new dog-eat-dog environment that Tesla has yet to experience. After all, Porsche is pretty cool too.

Here’s how Eric described this:

Therefore, the thinking goes, investors must price in the company’s brilliant future, rather than its underwhelming present.

Maybe so, but Tesla’s loss-making present is a known, whereas its brilliant future is simply a guess. And this guess looks increasingly dubious, as every automaker on the planet retools to launch EVs of its own.

The onslaught of competing EV models that is coming to market over the next two years is truly breathtaking. Tesla will struggle to repel this onslaught.

Given these headwinds, you could make a strong argument that the right way to play the Second Electric Revolution isn’t Tesla — or any specific electric vehicle manufacturer for that matter. After all, they will all be operating in the same cut-throat market.

Instead, perhaps the wiser play will be the mining and renewable companies that will sell to all these manufacturers, regardless of whether any particular one succeeds or fails. At the end of the day, each of these manufacturers will be needing the same copper, nickel, graphite, and lithium.

As we wrap up, whether you love or hate Tesla, you have to admire and respect it. This company has changed the game in the automotive world. But that doesn’t necessarily mean it’s the right horse for your investment dollars as the Second Electric Revolution arrives.

I’ll give Eric the last word:

(Telsa) is an undisputed innovator, but that doesn’t mean it will survive to lead the new era it has spearheaded. “First movers” like Tesla often succumb to the creative energies they unleash. Names like Betamax, Blackberry, Napster, and MySpace come to mind …

So, I say: Why not sell Tesla and buy the dynamic companies that will power and nurture the Second Electric Revolution?

Will Nickel Continue to Outperform?

Why Did PayPal Pay $4 Billion for a Coupon Browser Extension?