Nutrien, Mosaic: China And India Contracts Will Be Key

The shares of major fertilizer producers Nutrien (NTR) and Mosaic (MOS) have been under pressure since the beginning of July. The negative sentiment can be attributed to the recent weakness in fertilizer prices, especially ammonia and phosphates.

Potash has fared better, but the real test will be the upcoming annual negotiations with China and India. The outcome of these negotiations will have a bearing on Nutrien’s and Mosaic’s outlook for the next 18 months.

Every week, Mosaic releases its Plant Nutrient Price Dashboard which provides a good overview of fertilizer prices across the globe: 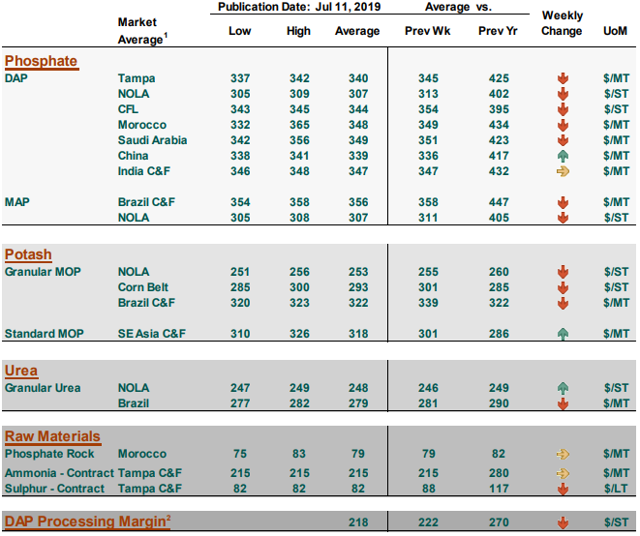 The report shows the challenging conditions for phosphates: Diammonium phosphate (“DAP”) prices and margins are seen to be significantly lower year-on-year. This explains why Mosaic’s shares have failed to rebound significantly despite the production restart at the Catalão mine in Brazil (the company had been forced to halt operations in the wake of the Vale tailings dam tragedy).

The price weakness in North America comes from the exceptionally wet weather conditions in the U.S., which delayed the fertilizer application season. Urea prices, unlike ammonia, have held up relatively well, supported by solid demand from India. Potash prices tend to be less volatile; however, the shorter application season is expected to have an impact on volumes.

That said, some market participants think that the bottom is in for ammonia and phosphates, with demand from the likes of India, Pakistan and Brazil remaining healthy, and U.S. volumes expected to pick up during the summer.

Potash: Annual Contracts up for Renewal

When it comes to potash, the largest contracts are determined on an annual basis. The key negotiations with China and India tend to happen during the summer. Canpotex (“Canadian Potash Exporters”), the exporting and marketing arm of Nutrien and Mosaic, is in charge of potash contracts with foreign buyers.

China and India accounted for 28% of Nutrien’s exports in 2018 (see table below). The prices negotiated with these two countries tend to set the tone for other customers, so the impact is far-reaching.

In September last year, major producers including Canpotex and Belaruskali were able to raise prices by $50 per ton and $60 per ton for India and China respectively. The increase, to US$290 per ton, had occurred from a low base as 2017 prices were depressed. This time around, the increase should be more moderate, possibly in the $5 to $10 per ton bracket.

Recent deals closed by Belaruskali in Bangladesh and Thailand point to a rather supportive backdrop for producers, with prices up around $20 per ton. A recent tender by PT Pupuk Indonesia saw prices reach $324 per ton, with volumes allocated to Canpotex, Belarus and Uralkali.

It remains to be seen whether producers will enjoy similar bargaining power with China and India. The outcome of the negotiations will have a meaningful impact on the financial results of Nutrien’s and Mosaic’s potash divisions for the next 18 months.

North American producers have insisted that the current fertilizer prices remain far below long-term averages. Their growth prospects are to a large extent predicated on improved prices. The new contracts will provide an indication as to whether the rising trend in potash prices since 2017 can continue, which would give credence to the bull thesis.

Mosaic encountered company-specific problems in H1 ’19, but, like Nutrien, it was also impacted by the recent weakness in fertilizer prices. I think investors should take a long-term view with these stocks, and keep their eyes on the fundamentals rather than short-term headwinds.

From that perspective, Mosaic’s current weakness provides a favorable entry point. Nutrien’s shares, meanwhile, have been in search of a catalyst. The upcoming potash contract renewals with China and India, if successful, could help reinvigorate the stock.

Were the Vikings Smoking Pot While Exploring Newfoundland?