Southwest Airlines (NYSE:LUV) has been beaten down quite hard along with all other U.S. airlines because of the COVID-19 pandemic. Since the beginning of the year, it has been down by nearly 41%, while the S&P 500 has declined by roughly 6.6%. Compared to other big airlines, including Delta (NYSE:DAL) and United Airlines (NASDAQ:UAL), we think Southwest Airlines has the most robust balance sheet. However, Southwest’s share price does not seem to be cheap now.

The COVID-19 global lockdown has put a lot of pressure on many airlines. Many countries closed their borders, and many people are scared of traveling. The global demand for airlines has dropped like a rock. While the top line has been shrinking significantly, airlines cannot reduce their expenses accordingly due to their high fixed-cost structure. The priority for airlines is raising enough liquidity for their survival. Thanks to the CARES Act from the U.S. government, we think that both Delta and United Airlines could raise enough cash for their operations within this year. However, if the global lockdown continues the next two years, it will put those two airlines in challenging situations. Southwest Airlines, on the other hand, could weather the current crisis much better than the other two airlines.

In the past 10 years, Southwest always maintained the lowest debt level. It has the lowest financial debt/EBITDA at only 0.71x while United Airlines and Delta have a much higher leverage level at 2.04x and 1.15x respectively. 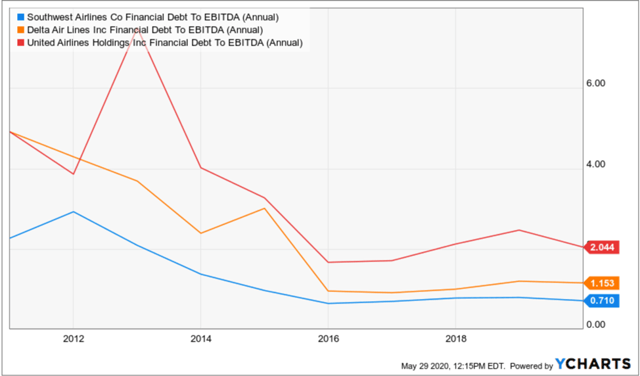 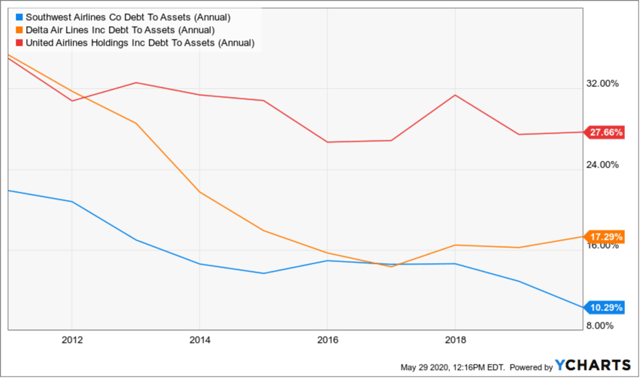 What we like about Southwest is its strong balance sheet with a lot of liquidity. In the first quarter of 2020, it had $3.94 billion in cash and more than $1.6 billion in short-term investments (mainly treasury bills and certificates of deposits). Thus, total cash and short-term investments amounted to $5.54 billion, more than enough to cover all the outstanding debts. To further strengthen the liquidity position, the airline has issued $2 billion in three- and five-year bonds to partly refinance its short-term borrowings. The U.S. government’s CARES Act would give the airline an additional $3.3 billion for payroll support. At the end of April, it raised $4 billion more, including $2 billion by offering 70 million shares at $28.50 per share, and $2 billion in 1.250% convertible senior notes due 2025. Those fund-raising activities could boost the airline’s current liquidity to more than $14 billion. Southwest also has $8 billion in unencumbered assets of aircraft, real estate, spare engines, and ground equipment, which can be tapped into for further liquidity enhancement.

Southwest has cost advantages over other U.S. airlines because of its operating strategies. Many other airlines have different types of airplanes for different services they offer to passengers, leading to higher operating costs. On the other hand, Southwest has only one aircraft type, Boeing 737. This has saved the company millions in maintenance costs, allowing it to offer low price airfares to passengers. Furthermore, while many big airlines operate a hub-and-spoke model, requiring passengers to transit in their hub before flying to their destinations, Southwest focuses on point-to-point systems, flying between two cities directly without any transits. Southwest is also famous for airfare transparency. It does not have any hidden fees in any services including baggage, seat selection, flight reservation changes, check-ins, etc. As a result, it can increase its load factor and market share in many U.S. cities while keeping its operating costs low.

We assume in the next three years Southwest could generate 100% of its 2019 operating income, which would be nearly $2.96 billion. We estimate that the total debt increases by more than $6.4 billion compared to the end of 2019, with an average interest expense of 3%.

With full dilution, including 70 million shares issued in the recent share offering and 2.6 million shares which could be issued when the U.S. government exercises its warrants, Southwest’s total share count could increase to 587.6 million. As a result, it could generate around $3.50 by 2023. Applying a 10x price-to-earnings valuation, Southwest might be worth $35 in the next three years.

Southwest is quite proactive in raising liquidity for its operation. With a strong balance sheet, we expect it can overcome the current COVID-19 crisis. However, we do not think that Southwest is cheap now. We estimate its 2023 fair value would be roughly $35, considering its higher interest expense and potential share dilution.