Gold and silver have staged a monster rally, and it’s the junior miners who hold the keys to this kingdom.

Our favorite precious metals are taking out multi-year highs… 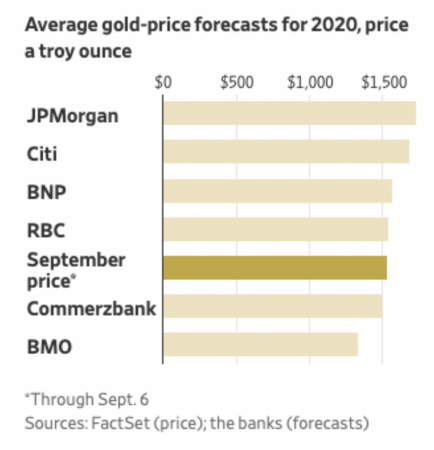 And that’s all thanks to a deafening barrage of fiscal and geopolitical catalysts—and the fact that the wealthy are now definitively shifting back to hard assets after an equities bull run that has gone on so long it’s grown uncomfortable.

Interest rates are at historical lows, with high levels of debt and fiscal deficits even as central banks run out of ammunition for economic stimulus.

There is a very real de-dollarization drive as governments such as Russia, China, Iran, Venezuela, Syria, Turkey, Qatar, India, Pakistan, Libya, Egypt and the Philippines increasingly shun the dollar and bulk up their gold stockpiles.

And gold is absolutely loving it.

Gold and silver punters are doubling down, and the smart money is flowing into precious metals.

You can buy physical gold, but you won’t get much of a return. You can play it safe with ETFs, too.

But the real returns here are with the miners. That’s because the market pays for gold that still in the ground.

And among the miners, the juniors have the most leverage by far. They’re heavily discounted relative to their assets in the ground, reserves and growth potential.

The biggest upside is in the exploration phase because the giant miners have handed the exploration torch to the juniors, while they sit back and wait to scoop up the next one to hit it big.

That’s where Alianza Minerals Ltd (TSX:ANZ.V, OTCMKTS:TARSF) comes in: Not only does it have a huge lineup of precious metals projects, but it’s already caught the eye of bigger players who are optioning up its assets.

Alianza, undervalued and sitting on projects in North America’s best gold and silver districts, isn’t new to this game. We’ve been here before, when they took a rare earth’s company to listing for a 500% gain.

This is a strategic bet on a management track record that has hit a number of home runs, and is ready to do it again—now.

Here are 5 reasons why Alianza Minerals Ltd. (TSX:ANZ.V, OTCMKTS:TARSF) is worth watching, closely:

#1 The Only Way to Play Precious Metals Right Now

There’s no better way to play gold right now than junior miners. A disproportionate amount of capital is flowing to junior miners today, especially on the Toronto Stock Exchange (TSX). That’s because juniors have the most leverage, and the most upside.

Juniors are netting billions of dollars in financing because the big miners have largely given up on exploration: 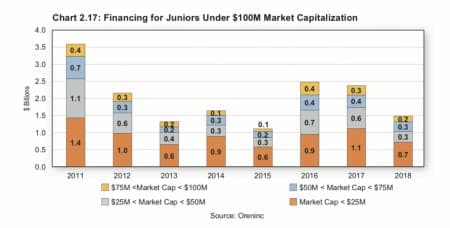 They let the juniors do all the heavy lifting and then scoop them up in rewarding deals for shareholders.

That’s why the majors have been investing record amounts of money in junior miners:

The best juniors seek out strong assets, use their own capital to explore and develop and then sell them to big miners for a major payout that can net shareholders far greater gains than any other strategy for investing in gold. That’s because the market will pay for gold that’s still in the ground, not just gold in the hand.

And when it comes to deals with the big miners, the team behind Alianza has already exposed shareholders to over $32 million dollars in exploration—85% of which was funded by giant partners such as Newmont Gold and Barrick Gold, two of the biggest producers in the world.

The Alianza team took a company called Rare Element Resources and turned it into a $500-million mid-cap company on the NYSE. They took it on, brought it through the development phase and took it from 10 cents a share to $15 a share.

Now they’re ready to do it again.

Alianza (TSX:ANZ.V, OTCMKTS:TARSF) has six active projects right now. Three of them have already been optioned to Hochschild Mining, and one to Coeur.

When it comes to North America, Nevada is one of the key places to be, and Alianza has already secured JV deals for three of its projects here—all of them in the early-stage opportunity cycle where the upside is greatest.

It’s almost impossible to find early-stage opportunities with huge potential upside in Nevada these days. They’ve almost all been scooped up already.

Alianza has three of them in Nevada—the premier US jurisdiction for gold exploration and development. 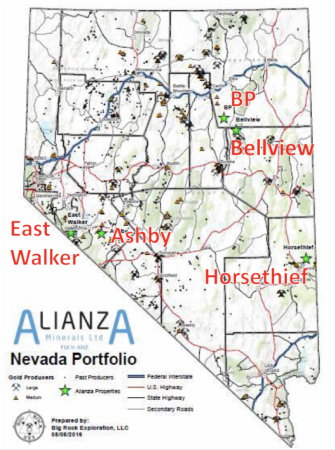 Hochschild Mining (HOC.LN)—a $1.4B market cap player–has already scooped up options on three of these projects: BP, Bellview and Horsethief for some $23 million.

Horsethief is ready to start drilling and is already permitted. And this geological section of Lincoln Country, Nevada is home to a Carlin-like gold system. Carlin-type deposits in Nevada are exactly what has made the US one of the leading gold producers for the past 40 years.

Carlin-type gold deposits are a class of gold deposits occurring in sedimentary rocks, of which Nevada has an abundance. Unlike vein deposits, gold is distributed throughout large volumes of rock, making them large profitable producers for the big gold miners.  For the most part, the major deposits occur along trends, such as the Carlin Trend which has lent its name to this style of gold deposit. However, recent discoveries have led explorers to search for these deposits off of the known trends.

At Horsethief alone, we’re looking at an under-explored Carlin-style deposit where shallow drilling has already intersected gold mineralization in four holes. Phase II, which may launch before the end of this year, is gearing up to prove the Carlin-style hit.

In fact, Horsethief could end up being another Long Canyon success story that saw Frontier sell it off to giant Newmont for $2.3 billion. Long Canyon was not on one of Nevada’s established trends, so when the discovery hit, it was a wildcat deal, and went for a premium. Horsethief is another off-trend project that already shows a lot of similarities to the Long Canyon discoveries. That’s undoubtedly what Hochschild sees in it, and why it’s rushed in to scoop up options.

Two other Alianza projects have also been JV-ed already in Nevada: Bellview and BP.

Bellview is right next to Kinross gold mines ‘Bald Mountain’ and they’ve already seen evidence of a similar type of gold occurrences. Kinross Gold’s Bald Mountain project has proven and probable reserves of 1,347 Au koz. Kinross scooped up 100% interest in the project in Q3 2018, and last year it produced nearly 285,000 ounces at a cost of $547/oz.

That’s a fantastic margin with gold closing in on $1,520/oz, and investors will love the Alianza (TSX:ANZ.V, OTCMKTS:TARSF) close-ology on this one.

The Yukon hosts one of the world’s richest silver districts, and Alianza has a 10-year land use permit at its Haldane prospect here. This is one of the highest-grade silver projects in the world… [Mark; not sure I am comfortable with this statement…]

Over 65 deposits have already been identified in this district: 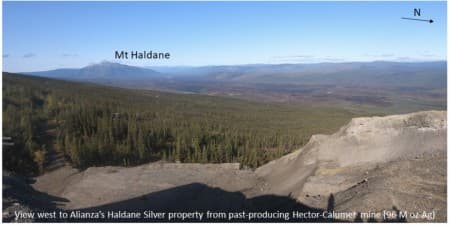 With new technology, this is an entirely new game in an underexplored silver zone with tons of upside exploration potential.

Then, we’ve got the ‘Golden Triangle’ of the biggest, premier mining districts on industry giant radar in North America right now. 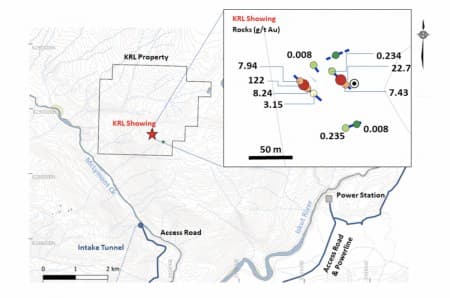 Even better, there has been a string of recent discoveries in the Triangle in the past year:

There are also significant exploration programs ongoing at three different projects in this area, and one that’s gone into production at Brucejack.

The close-ology in this premium play doesn’t get much better than this.

#4 They’ve done this before

The Alianza team is headed by mining gurus with proven track records for picking high-grade mining assets, building them up and growing shareholder value exponentially.

Their [Mark’s] main claim to fame is Rare Element Resources –a company they built from the ground up and listed on the NYSE. Mark – maybe just word this to say you built it and sold it. No need to talk about 2019 with this one.

That proved to be an incredibly strategic call, with the trade war fiasco between the U.S. and China helping Rare Elements shares climb nearly 530% in 2019. 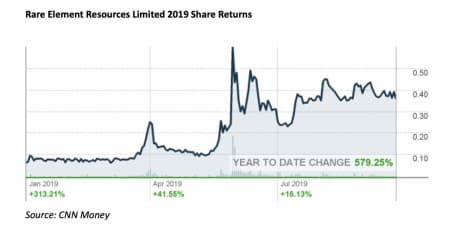 Mark founded Rare Elements and raised funding for all its operations.

The duo’s first-hand experience has led them to look at Alianza realize its potential for another big payday.

The invaluable experience has also put them in good stead to understand the timelines for developing mining assets from the ground up. The good news: it took Rare Elements 12 years to develop and monetize, meaning 11-year old Alianza could be right on the cusp of a big break out.

Jason is a geologist by training and ended up in consulting after working for a few major companies. This consulting group would generate new projects and ideas to sell to prospective clients and generate work for themselves in the slow times.

One of their landmark achievements: the group generated an idea for massive sulphide deposits in the Yukon which led to the discovery of the Wolverine deposit.

In 2001, they launched Rimfire Minerals–again based on the Equity Engineering model and listed the Vancouver stock exchange. Like its predecessor, Rimfire generated ideas and sold them to bigger companies and even facilitated funding for projects by forging partnerships with industry heavyweights like Newmont Mining.

And get this: Rimfire certainly knew what it was doing. It partnered with the biggest producers in the world (Newmont, Barrick, AngloGold), who funded over 85% of its exploration on projects in North America and Australia.
Alianza (TSX:ANZ.V, OTCMKTS:TARSF) could be about to score a similar homerun: their prolific Horsethief Gold Project is showing a lot of similarities to Long Canyon …

That’s why it’s already generated mid-cap interest in the form of options.

So, we have a company here that has already built up mining companies and sold them for enormous profit, and now wants to do it again.

It’s got three active Nevada gold projects that have already been optioned off. One of them has been identified as a prolific Carlin-type deposit, with drilling set to launch before the end of the year. Another has exceptional ‘close-ology’, right next to a major producing goldmine owned by large-cap Kinross.

Then, they’ve got a highly prospective silver project in one of the best silver districts in the world—the Yukon Territories. That, too, has already sparked the interest of bigger players, with one project optioned off.

The news flow has been fast and furious, with the Bellview, BP, Horsetheif and Haldane projects launching in May and June, followed by KRL exploration in August and the start up of drilling at Haldane.

Now it’s about to flow even more: With more work likely in Nevada at BP or Horsethief, and results from KRL Gold, Horsethief, BP and Haldane drilling. All this with the prospects of a drill program in the near term at Horsethief.

That’s a constant news flow of drilling and results from now until the end of the year on multiple precious metals projects at a time when the big miners have run out of new prospects, and the junior miners are doing all the heavy lifting.

With three of Alianza’s (TSX:ANZ.V, OTCMKTS:TARSF) projects already optioned off to bigger players, and with the mid-cap and large-cap miners just waiting for the next junior gold discovery, a news flow like this on multiple projects will generate a lot of attention in the industry.

And even more so when the people behind it are the same ones responsible for the Rare Earths coup that has shareholders enjoying 500% returns.