Why Gold Prices Are About To Skyrocket Even Higher

The gold bears have finally caved under the deafening barrage of fiscal and geopolitical catalysts, from Fed hints to intensely brewing conflict with Iran. But there is one key trend that stands to push gold up beyond $1,700–regardless of the day’s news.

Of course, it’s difficult for the bears to ignore a nearly $50/ounce gain for gold, which is now trading well above its 5-year high. 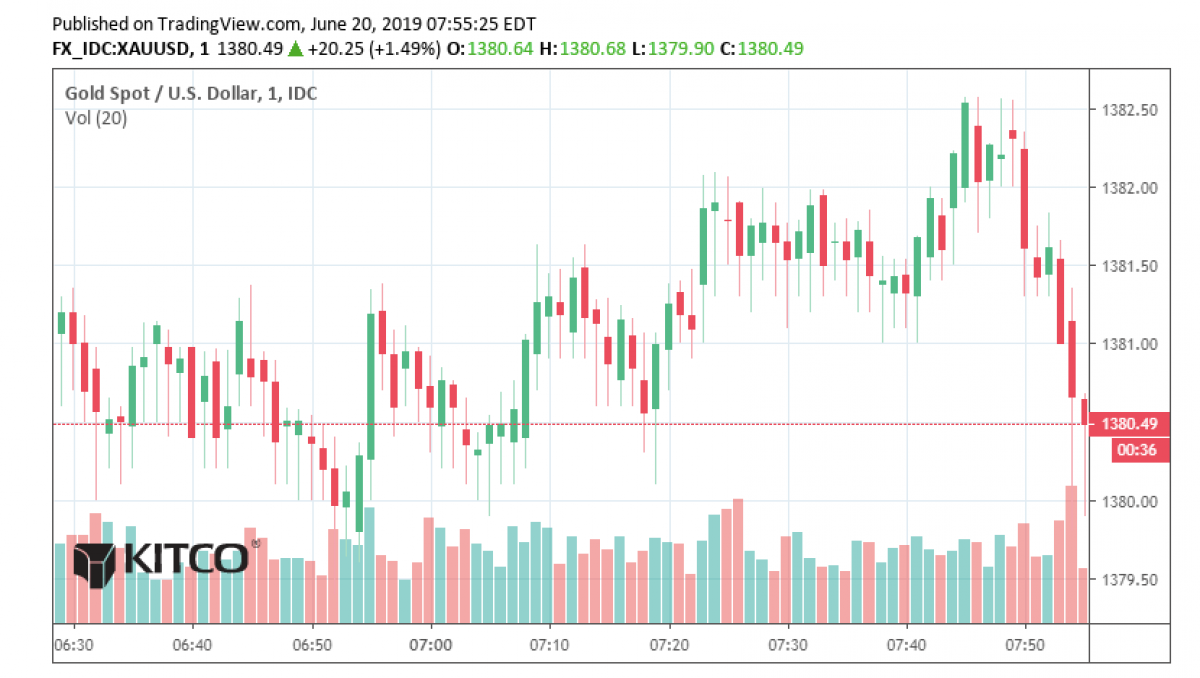 Not only has the U.S.-Iran conflict reached a boiling point, with Trump readying to deploy an additional 1,000 troops to the Middle East, but the European Central Bank has issued a defiant, dovish tone, saying it won’t hesitate to provide further stimulus: That means rate cuts.

The icing on the gold cake is the US Fed, which has now clearly indicated that it hasn’t abandoned the idea of rate cuts for 2019.

But in this perfect storm for gold prices, EuroSun Mining (TSE:ESM, OTCMKTS:CPNFF) CEO Scott Moore says we’re overlooking a significant trend that will outlast the current geopolitical meltdown and even the Fed’s policies: It’s a global push for de-dollarization.

“Government’s around the world are becoming increasingly wary of the dollar’s hegemony in international trade,” says Moore. “And they’re doing their best to distance themselves from it by using their gold reserves to buy more gold instead.”

This process is already underway mainly in nations with strong anti-U.S. sentiment including Russia, China, Iran, Venezuela, Syria, Turkey, Qatar, India, Pakistan, Libya, Egypt and the Philippines among others.

Naturally, these countries are turning to gold since the yellow metal is not under lock-and-key like the greenback and other electronic payment methods.

This trend is abundantly clear when you look at central banks’ buying activity.

According to the World Gold Council, central banks purchased nearly 70 percent more gold during the first quarter of the year than they did during the previous year’s corresponding period.

That’s the most they bought since the first quarter of 2013.

For EuroSun’s Rovina Valley project in Romania–the largest in-development gold mine in Europe–the de-dollarization drive will been a boon for the 10 million ounces of gold equivalent they’re hoping to get out of the ground in the simple geography of Romania’s prolific Tethyan Gold Belt.

There are plenty of billionaire fund managers who think today’s ‘crazy’ gold prices are just getting started.

Not least among them is Paul Tudor Jones, who says that gold “has everything going for it”, and sees it pushing to $1,700 an ounce “rather quickly”, as he noted in an interview with Bloomberg.

And this is all just thanks to near-term trends wrapped up in the Fed and wild geopolitics.

We’re interested instead in the long-term trend that is says gold will be a major winner of the global de-dollarization trend.

There’s nothing like a sanctions frenzy to create a major uptick in momentum here.

Most notably, Russia and China have pledged to accelerate their de-dollarization strategies because of Trump’s sanctions push. And they’ve reached a deal to use national currencies for bilateral trade. No more U.S. dollar, then.

So, we’re carefully watching what the central banks are doing.

Tudor is watching these developments closely, and to him, it suggests an unprecedented shift:

“Remember we’ve had 75 years of expanding globalization and trade, and we built the machine around the belief that’s the way the world’s going to be. Now all of a sudden it’s stopped, and we are reversing that,” he told Bloomberg.

“When you break something like that, the consequences won’t be seen at first, it might be seen one year, two years, three years later. That would make one think that it’s possible that we go into a recession. That would make one think that rates in the US go back toward the zero bound and in the course of that situation, gold is going to scream. ”

EuroSun’s (TSE:ESM, OTCMKTS:CPNFF) Moore agrees: “What’s happening with Iran right now will only further the de-dollarization push. The dollar isn’t necessarily king anymore, and gold is more than ready to resume its rightful place on the safe haven throne.”

Yamana, has recently completed its Cerro Moro project in Argentina, giving its investors something major to look out for. The company plans to ramp up its gold production by 20% through 2019 and its silver production by a whopping 200%. Investors can expect a serious increase in free cash flow if precious metal prices remain stable.

Recently, Yamana signed an agreement with Glencore and Goldcorp to develop and operate another Argentinian project, the Agua Rica.  Initial analysis suggests the potential for a mine life in excess of 25 years at average annual production of approximately 236,000 tonnes (520 million pounds) of copper-equivalent metal, including the contributions of gold, molybdenum, and silver, for the first 10 years of operation.

The agreement is a major step forward for the Agua Rica region, and all of the miners working on it.

This Canadian mid-cap miner has assets in Europe and Brazil and has managed to cut cost per ounce significantly in recent years. Though its share price isn’t as high as it once was, Eldorado is well positioned to make significant advancements in the near-term.

In 2018, Eldorado produced over 349,000 ounces of gold, well above its previous expectations, and is set to boost production even further in 2019. Additionally, Eldorado is planning increased cash flow and revenue growth this year.

Eldorado’s President and CEO, George Burns, stated: “As a result of the team’s hard work in 2018, we are well positioned to grow annual gold production to over 500,000 ounces in 2020.  We expect this will allow us to generate significant free cash flow and provide us with the opportunity to consider debt retirement later this year. “

All eyes are on the billion-dollar partnership these two giants are forming in Chile’s gold belt. Goldcorp is putting up $1 billion to get in on this deal as miners scramble for new sources of growth. This joint venture will see the two giant miners operate three properties in Chile’s Maricunga region, and these will be major catalysts for both.

Newmont Mining Corp (NYSE:NEM) Founded over 100 years ago, Newmont Mining Corporation (NYSE:NEM) is one of the leading mining companies in the world. The company holds assets in Peru, Australia, Ghana, Indonesia, Mexico, and around the United States. Primarily focusing on gold and copper, Newmont has steadily carved out a name for itself among those in the industry. In Q1 2017 alone, the company secured over 1.2M ounces of gold. Definitely noteworthy for investors.

Wheaton is a company with its hands in operations all around the world. As one of the largest ‘streaming’ companies on the planet, Wheaton has agreements with 19 operating mines and 9 projects still in development. Its unique business model allows it to leverage price increases in the precious metals sector, as well as provide a quality dividend yield for its investors.

Recently, Wheaton sealed a deal with Hudbay Minerals Inc. relating to its Rosemont project. For an initial payment of $230 million, Wheaton is entited to 100 percent of payable gold and silver at a price of $450 per ounce and $3.90 per ounce respectively.

Randy Smallwood, Wheaton’s President and Chief Executive Officer explained, “With their most recent successful construction of the Constancia mine in Peru, the Hudbay team has proven themselves to be strong and responsible mine developers, and we are excited about the same team moving this project into production. Rosemont is an ideal fit for Wheaton’s portfolio of high-quality assets, and when it is in production, should add well over fifty thousand gold equivalent ounces to our already growing production profile.”

Centerra Gold is a Canada-based gold miner with flagship assets, the Mount Milligan Mine and the Kumtor Mine which are located in Canada and the Kyrgyz Republic respectively. It also owns the Öksüt Gold Mine in Turkey, making it the single-largest North American gold company operating in Asia, with over 22 years of experience in the region.

Centerra’s biggest selling points, however, are its strong balance sheets. For 2018, the company reported over $100 million in net earnings, generating over $217 million from cash operations, exceeding many analyst’s expectations.

Scott Perry, President and Chief Executive Officer of Centerra stated, “As a result of the strong fourth quarter operating performance at both operations, the Company exceeded its overall 2018 production and cost guidance producing 729,556 ounces of gold at an all-in sustaining cost on a by-product basis of $754 per ounce sold, beating the low-end of our all-in-sustaining cost guidance for the year.